Almost every parent dreams about taking their kids to Walt Disney World, a.k.a the “Most Magical Place On Earth.” We all picture the most amazing vacation EVER, filled with precious family memories that no one will ever forget.

But sometimes, things are not exactly as we expect them to be. Knowing the pitfalls can prevent a glitch in your day from ruining your entire vacation.

1. It is possible to over plan

If you’re like me, you want to get the most out of every single second you’re at Disney World.

From park hours to fast passes to dining reservations to character experiences, you want to make sure you do it all.

But over scheduling and rigid timelines can have an extremely negative effect on your vacation and leaves little room for those magical, spontaneous Disney moments that make WDW what it is.

I have found that when I schedule too many things, I spend my whole vacation stressing about the schedule and not relaxing and enjoying the moment.

To alleviate this problem, we prioritize one thing we want to accomplish each day of our vacation.

Yes, we schedule our dining reservations and fast passes, but beyond that we only have one “must do” for each day.

As far as a touring plan goes, we’ve have found it to be much more relaxing to just have a general idea of when and where we want to be during the day instead of scheduling out every minute and every ride.

Being flexible with our schedule has allowed for some pretty amazing experiences.

2. It’s hotter than you think it ever possibly could be

Florida is hot. There’s no getting around it. While it’s wonderful to have sunshine so many days of the year, July and August in Florida feel like you’ve fallen into the 7th circle of hell.

You could not pay me to visit Disney World again during the summer. With average temps in the 90s and humidity that makes it feel like the 100s, it can be pretty miserable.

Our most recent trip was in November, and even that was pretty warm. If you’re fine with heat, then more power to you, but if you’re like me, schedule your vacation during the winter if at all possible. You’ll thank me later.

3. It’s can be totally exhausting

Many people don’t realized how much walking is actually required at Disney World. You can easily put in more than 10 miles a day getting around the parks. Distance + heat is a recipe for disaster.

Two of the best tips I’ve ever received about a WDW vacation involved avoiding exhaustion. The first tip was even if your child doesn’t use a stroller at home, you might want to consider using one in the parks.

One of our visits occurred when our kids were ages 4 and 6. We were pretty much done with strollers at home, especially for my 6 year old.

I’m not fond of the molded plastic strollers available for rent from Disney, so we booked a jogging stroller from Kingdom Strollers to be delivered to our resort.

I expected only my 4 year old to use it, but my 6 year old crashed out in it just as much. Their little legs just weren’t quite ready for the workout.

The second tip was to go to the parks early, take a break in your room for a nap during the hottest part of the day, then return to the parks late afternoon and stay until closing. This worked super well for us and as a bonus, helped us avoid crowds.

4. Rides will break down

Disney World isn’t a perfect place. The rides sometimes break. Not to worry, though. Disney has a contingency plan for every ride in the event of a break down.

Break downs can actually be a good thing sometimes if it means you’re stranded for a little bit.

My family was once stuck on The Many Adventures of Winnie The Pooh for about half an hour. We were given instructions to stay put over the loudspeaker.

A cast member escorted us out of the ride and we were handed a fast pass for any other ride in the park to use whenever we wanted.

Totally worth the hassle, since that got us on Peter Pan’s Flight (usually an extremely long stand by wait) less than 15 minutes later.

5. Construction and ride rehab can hamper the fun

During the off season, Disney World frequently shuts down rides for maintenance and rehabilitation. Sometimes, this can stink.

During my kids first trip, I had been so excited to take them on Spaceship Earth, a ride that I fondly remembered from my childhood.

I was SO bummed when we walked into Epcot, and there were big signs saying “Closed for Refurbishment.”

When booking your trip, there are lots of places online to find lists of what will be closed during your visit.

Just be sure you’re booking your trip for when your favorite rides will be available.

While Walt Disney World arguably has the best cast members (aka employees) in the world, it is impossible not to run into one or two people who just aren’t good at their jobs.

A few years ago we traveled to WDW with my mother-in-law who is wheelchair bound.  Special accommodations were made for her and we had a great experience on every ride, except for one.

The now defunct Maelstrom in the Norway Pavilion in Epcot was less than stellar.  Maybe the guy was just having a bad day, but he was exceedingly rude and made it very clear that the ride did not have accommodations for those in wheelchairs.

My MIL was mortified.  Needless to say, I am not sad that it is gone.

On a different trip, we also had a character meet and greet with Mary Poppins that was kinda awful.  She was very stern and didn’t seem happy to be there.

I get it, Mary Poppins was a no-nonsense kinda gal, but this experience lacked the magic of the movie.

It WAS super hot and I wouldn’t have wanted to be in that costume either, but we were like the second kids in line to see her, so I was pretty let down by the experience.

But these were isolated experiences.

In all my trips to Disney, these are the only bad experiences we ever had with cast members. By in-large, they are an amazing group of people who go out of their way each and every day to make the parks magical for every guest.

Sometimes, people in your group just aren’t feeling it.  During the middle of one of our first trips to WDW, we had a day at Animal Kingdom that just wasn’t going as planned.

It was ridiculously hot, and crazy crowded (when all the crowd calendars had said it wouldn’t be!!).

We got there at open, and by noon, we were just done.   Our breakfast reservation had been no where near as fun or as delicious as we’d been told it would be.

We were all exhausted and grumpy, and no one was having any fun.   We still had fast passes to use, and planned to eat dinner at a much-hyped barbecue place, but we decided to ditch it all and head back to the hotel.

We all took a long nap and then spent an afternoon by the amazing pool at our resort.

We then decided to go exploring at the Grand Floridian Resort, where we enjoyed dinner at their quick service restaurant.

We happened to grab seats outside and finished up just in time to enjoy the fireworks over the castle from across the lake.  It turned into a spectacular night.

Sometimes the parks just aren’t magical.  When everyone is approaching heat stroke and you’re all exhausted, there isn’t much that could make any place magical.  Being willing to change plans when it isn’t working is essential to not ruining your experience at WDW.

Even with all these drawbacks and problems, every trip to Walt Disney World I’ve ever taken has been worth every penny.

There really is no where else like it.  While we’ve taken many other types of vacations, Disney World remains my favorite and I would go back tomorrow in a heartbeat.

All this being said, I will NEVER make a breakfast reservation at Disney World again.  Wanna know why?  Check out my post about it HERE!!

Check out my list of nine essential items you need for your Disney Vacation.  Read:  Things To Order from Amazon To Pack The Perfect Disney Park Bag!

Anything you would add to this list?  Leave it for me in the comments! 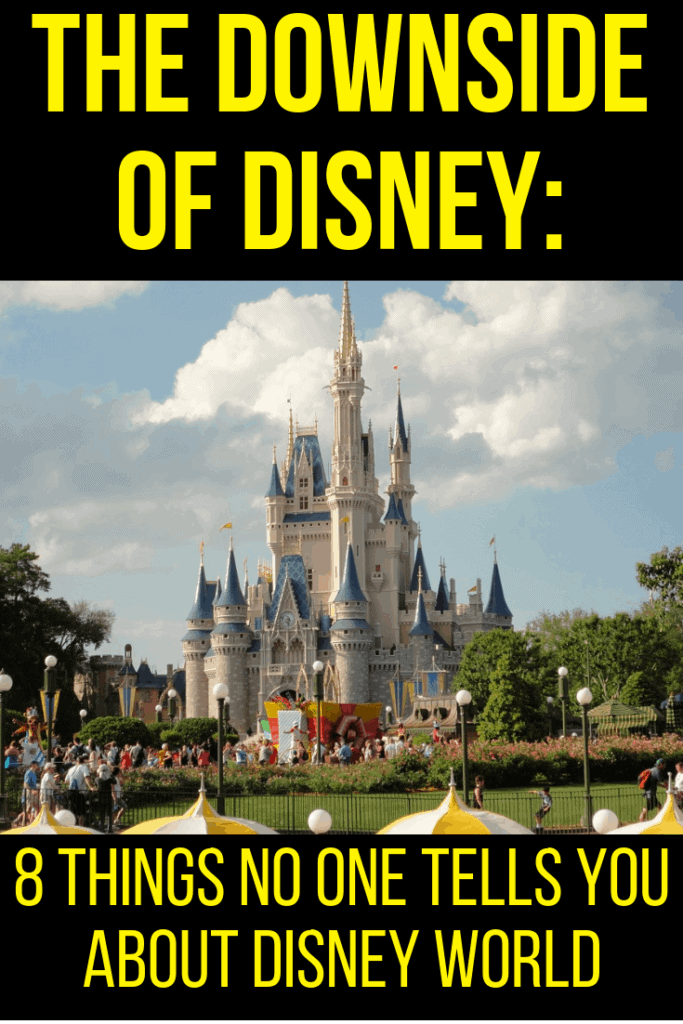 The other thing that’s not so magical about Disney is that sometimes the other guests can be downright rude. We usually find them to be pleasant and friendly, but that isn’t always the case. This past year was especially true for that. I had an entire family from NY jumping my case because the toddler kept kicking me on the over-crowded bus and I said, “Ouch! That hurt!” I had to listen to them nonstop until we got to Animal Kingdom. When we got off the bus, the man came up to me and said he hoped something bad would happen to me that day. It was quite upsetting, especially to my grandchildren who heard it.

Another incident (same trip) was the people in the next room to ours. The rooms had connecting doors, so you could hear EVERYTHING, word for word. They got into a fight and the woman was throwing out the F word every other word. Not what you want to listen to while trying to relax on your midday break from the parks. After 30 minutes, I called the Front Desk about it. Even with the phone being on the other side of the room, the cast member on the other end could hear them! She would have moved us to another room, but there weren’t any available. As soon as we could, we moved to a different resort.