We love to play some Uno over here, especially our own version which has become known as Uno House Rules.

Over the years, this card game has been known by many names:  Dirty Uno, Crazy Uno, Wild Uno, Apocalypse Uno, and more.  No matter what we call it, we never fail to have a ball when we play.

The rules we play by that I’m outlining here are in no way official.  They’re just the rules we’ve found that make Uno more fun to play, especially for adults.  You can change them in any way you like.  That’s why we call it Uno House Rules!  You can use whatever rules your house decides on!

I was originally taught this game by my brother-in-law’s family, shortly before my sister got married over 20 years ago.  Obviously, we’ve enjoyed it so much that we still play today. 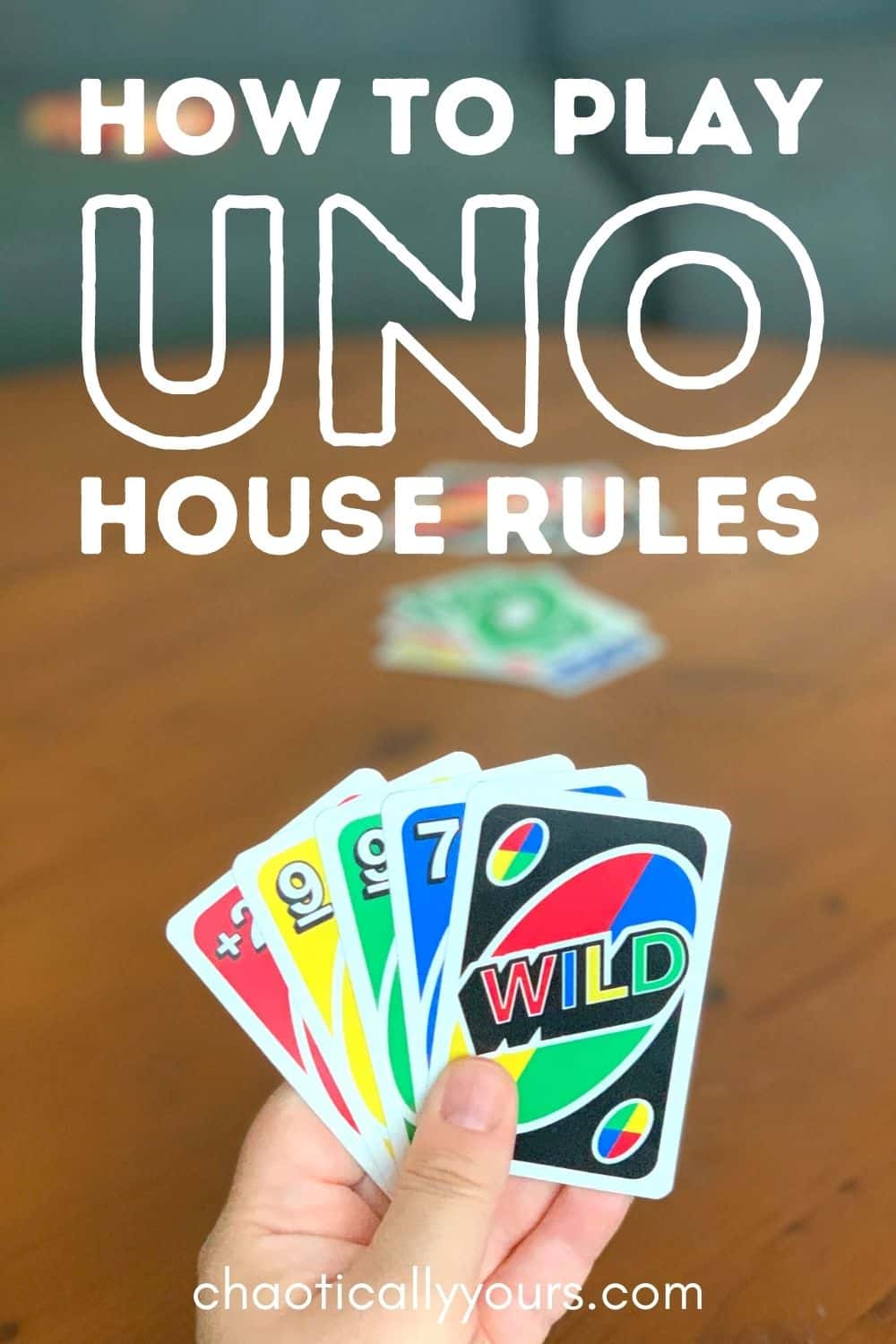 We’ve taught Uno House Rules to hundreds of people we’ve met over the years.  One group enjoyed it so much that they set up a weekly game, and kept tabs on the running score on a website.

This version of Uno can get really cutthroat and competitive, but it is SO much more fast paced and fun than the original game.

And now, I’m sharing our crazy family game with the world!

To play our wild Uno House Rules game, all you need is a basic deck of Uno cards.

If you’ve playing with a large group, you might need multiple decks.  I’ve played this game with up to 12 people at a table, and it’s still just as fun.

Uno is available at just about any large retailer, or you can order it from Amazon here:

Uno House Rules: Before You Play

The basic premise of our Uno House Rules game is the same as the regular Uno card game.

You want to be the first person to get rid of all your cards in each hand and have the lowest score at the end of the game.  Like classic Uno, you must say the word “Uno” when you only have one card remaining in your hand or you will be handed 2 new cards.

The same concepts of matching color or number to play a card still apply in our Uno House Rules version.

If you’ve never played a hand of Uno before, I recommend playing the basic game first.  You’ll want to be familiar with the basic rules so you can understand the changes we’ve made to them.

You can find instructions for how to play basic Uno cards HERE.

Know how to play basic Uno?  Great!  Now we can move on to the fun stuff!

In our crazy Uno House Rules game, the action starts before you even play the first card.

It is vital in Uno House Rules that the dealer of the cards rotate between every hand.  The same person can shuffle the cards, but the dealer MUST rotate.

If the dealer is able to pull the EXACT number of cards that need to be dealt to all players in one cut of the deck just before dealing them, they automatically get -50 points off their score.

Yes.  You read that correctly.

By just cutting the deck, someone can get the advantage of having a whopping 50 points knocked off their score each hand that is dealt.

For example, say you have a group of seven players at your table.  Each player needs seven cards to start the game, so if the dealer is able to pull 49 cards off the top of the deck by just cutting them, they earn this reward.

It’s actually a lot harder than it looks, and doesn’t happen very often.  But once in a while, you run into someone with the magic touch who can hit it spot on!

Fifty points may seem like a lot, but when you see the scoring set up of Uno House Rules, you’ll understand that it really isn’t too bad.

Now for the crazy part!

There really are only four main differences between Uno House Rules and classic Uno rules.

These four points may sound weird, but don’t worry.  I’m going to explain them in detail. 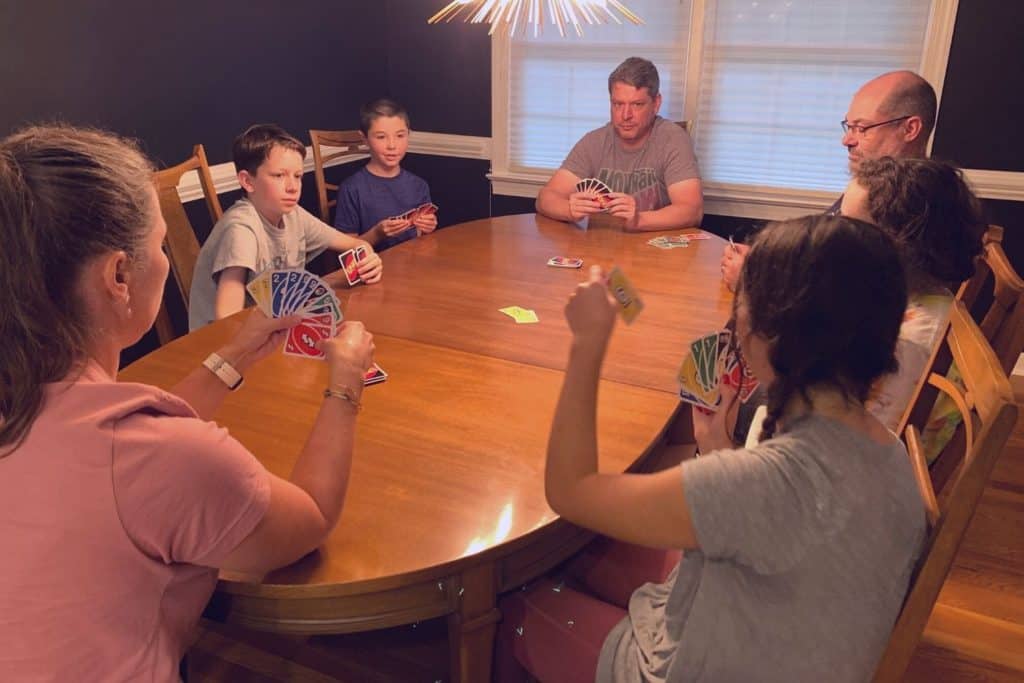 Playing Out of Turn

The first change in our Uno House Rules game is that players are allowed to play out of turn.  This makes the action of the game move extremely fast, and requires that players always pay attention to what’s going on.

Here’s how it works:

If you have a card in your hand that is an EXACT match for the card that has just been played, you can skip over any other players ahead of you and play that card.

When we say exact match, we mean EXACT.  To use this rule, the card must be completely identical to the one that was just played.

When playing out of turn, the catch is you MUST get it on the table before the next player who is playing in turn for the exact match card to count.

If you get it on the table fast enough, all players between the original card player and the exact match card player are skipped and play continues with the next player in the direction of play.

What happens if someone has two exact match Uno cards in their hand?  They can play them both back to back, but they must physically leave their hand separately.

This means you can’t grab them both and throw them down.  You must give the next player in line the opportunity to play.

You don’t have to do it slow, but if other players are paying attention, they can beat you to the punch.

If the next player is quick enough to throw a correct card down in between the two exact cards being played from the same hand, the second identical card is denied because it is no longer an exact match for the card in play on the table.

If someone plays two identical action cards on top of each other, the action doubled.

For example, if someone plays a Blue Draw 2 card and an exact match Blue Draw 2 is played out of turn, the next player in the direction of play is required to draw four cards. 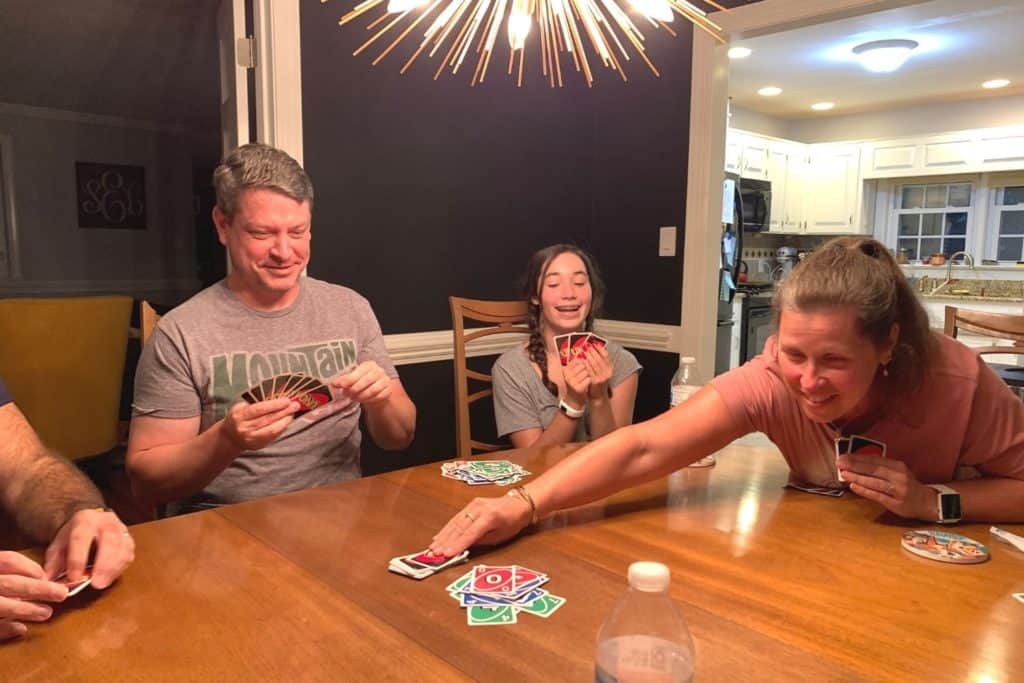 How To Handle Zeros in Uno House Rules

Zeros in classic Uno are just cards that add no points to your hand if you have them at the end of the game.

In House Rules Uno, a zero card can be the bane of your existence.

When a zero card is played in House Rules Uno, every player must shift their hand to the person next to them in the direction of play.

For example, you’re down to just two cards in your hand.  The person to your right just got hit with two Draw 4 cards, and now has 12 cards in their hand.  The player on your left has eight cards and, when it’s their turn, plays a Green 0.

What if a player plays their last card as a zero?  If this happens, all the remaining players must shift hands in the direction of play, and whatever is in their new hand is their score for that round.  The player who went out on the zero still gets no points.

I know.  Uno House Rules is CRAZY!  But that isn’t all the insanity we have for you.

The Red Zero of Death:  The Most Dangerous Card In House Rules Uno

The zero rule is crazy enough, but if you play the RED zero, things get really out of hand.

If a player lays down the red zero card, that player must first add 10 cards to their hand before they pass it along to the next person in the direction of play. 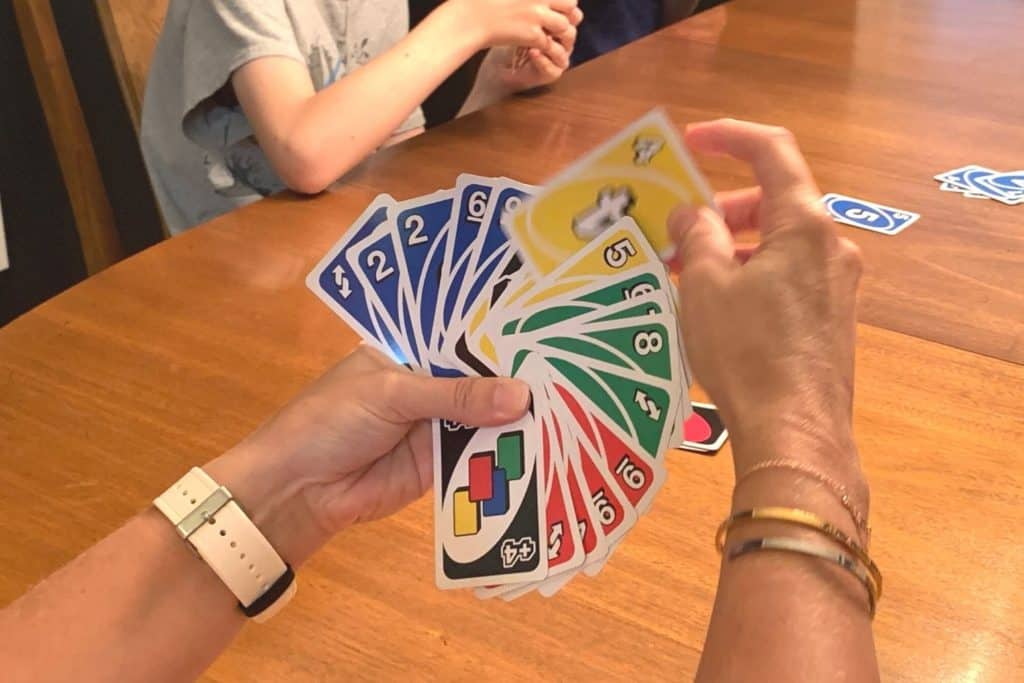 As they add those ten cards, and they may look at them as they add them.  So they know exactly what they are handing to the next player.

This move frequently results in another zero being in the gigantic hand that has just been passed.  When that happens, the next player usually plays that zero immediately to get rid of the giant hand of cards.

This is where the game can get really unpredictable.  You never know when that red zero is gonna come out, or who will end up with the gigantic hand.

I bet you’re wondering what happens when someone goes out on a red zero.

Actually, you can’t go out of the game on a red zero.  Since it adds 10 cards to the hand of the player who threw it before they pass it, you technically aren’t out of cards yet.

If the red zero is so crazy in this game, why would anyone want to play it?  You’ll find out in the next section!

Scoring our version of this wild Uno game is a bit different than normal as well.

Once someone has gotten rid of all their cards in a hand (remember, they still must say “Uno” when they only have one!), the scoring can begin.

Most of it is simple enough.  Numbered cards are worth their face value, with the exception of the zeros.  Blue, yellow, and green zeros are worth 20 points, as are the action cards like Draw 2 and any Wilds.

The red zero of death is worth 50 points.  This is reason enough to get it out of your hand ASAP.

Now you can see why that -50 from dealing the cards can come in real handy!

We usually play this game until someone hits 500, but you can play until whatever suits your schedule.  Like I said, one group we taught it to had a running game for years!

FYI – these rules are not set in stone.  Feel free to use the ones you like and throw out the ones you don’t.

That’s part of why we like this game so much.  We can play it however we want to because it’s our house!

Have you played anything like Uno House Rules before?  Any crazy rules I don’t know about?  Leave them for me in the comments!

And here’s a word to the wise: If you are competitive at all, do NOT sit next to your spouse/boyfriend/girlfriend/sibling/basically anyone you really care about during this game.  It won’t end well.  Believe me, I speak from experience.

Looking for other fun games to play with your family?  Check out my DIY Mancala post or learn How To Make A Hexaflexagon!

Playing Out Of Turn

These rules are not set in stone, and may be changed and altered to whatever your group likes.

As an Amazon Associate and member of other affiliate programs, I earn from qualifying purchases.

I've seen and played variations of this before, but never with the unique 0s scoring. I love the Red Zero of Death concept! I'll have to give this a try. Thanks.