In today’s post, you’re going to learn Mancala Rules and how to make your own Mancala board at home, using just a few simple materials!

Mancala is basically a two player strategy game that involves moving tokens between holes or pits, with the object being to capture as many of your opponent’s tokens as you can.

Mancala is actually a lot of fun to play and is super easy to learn.  Mancala rules are simple and straightforward, and almost any age group can easily figure it out.

The game of Mancala is great in the classroom, since it reinforces math skills, logic, and strategy.

Making your own mancala board is also a great project for groups.  I’ve seen it used in girl scout groups, homeschool co-ops, and even at senior citizen centers as a craft project!

It really does work well for LOTS of ages. 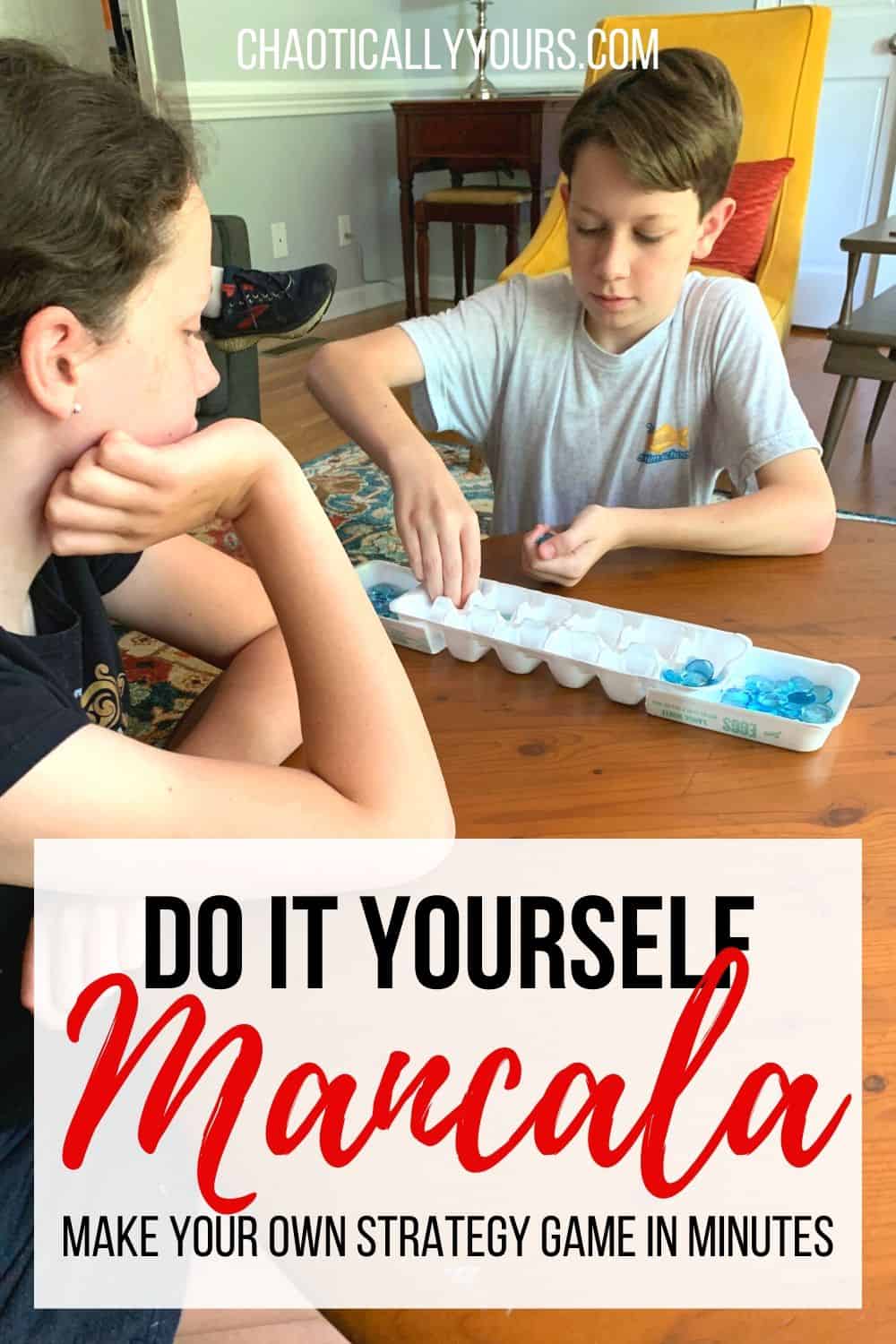 Mancala is considered the oldest board game that is still being played today.  Evidence of its origins date back to some of the oldests civilizations in the world.

I was introduced to this game when I was in high school by my dear friend Brandon.  He used to make a joke out of beating me, which he ALWAYS managed to do.

When I went off to college and spotted a gorgeous wooden Mancala game board at my local mall, I bought it immediately.  I’ve had that same game in my home for over 20 years now. 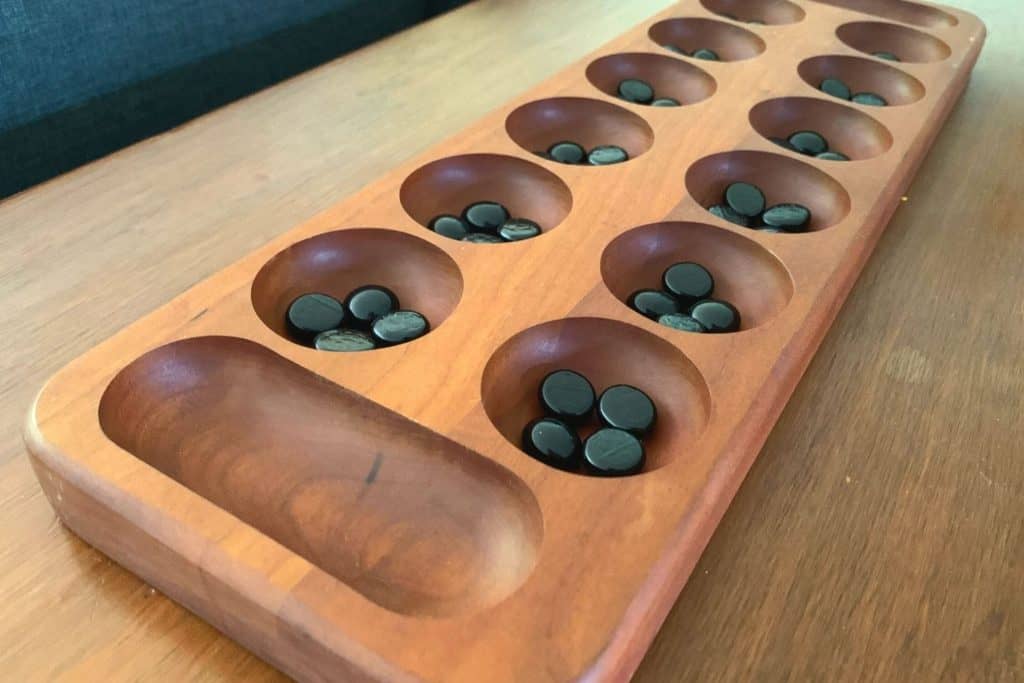 We keep my lovely wooden game board in our living room, available for play whenever any of us want to start a game.

It only takes a few minutes to play a game of Mancala, so we find ourselves playing it a lot.

As much as I love my wooden game board, we discovered that it’s quite easy and inexpensive to make your own DIY Mancala game using items your either already have at home or can find at your local dollar store.

First, I’ll explain the Mancala rules.  Then I’ll tell you how to make your own board!

Mancala rules are relatively simple.  The objective of the game is just to have the most tokens in your mancala (or your well) at the end of the game.  Easy enough, right?

But be aware, playing Mancala requires some strategy if you want to win!

Each player sits opposite each other, with the long sides of the board facing them.

Four tokens are placed in each of the twelve small wells in the center of the board, leaving the two large wells at the ends, known as mancalas, empty.

The six small wells closest to each player and the mancala on their right side belong to them. 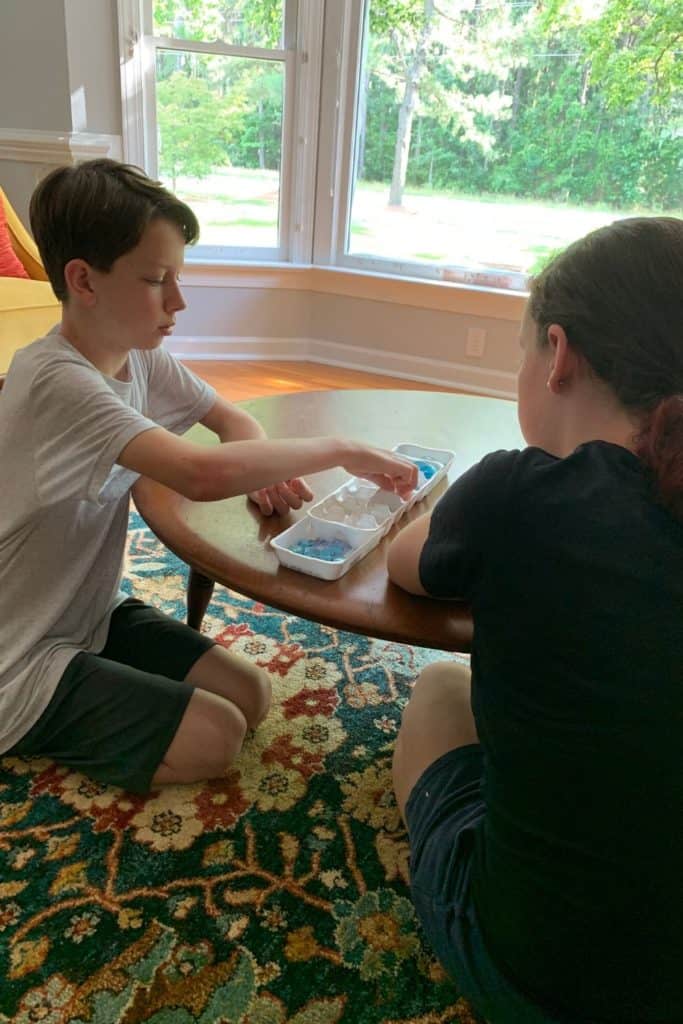 On each turn, a player will take all the tokens from a cup on their side of the board.

Moving clockwise, players will place one Mancala token in each well until you run out of tokens. This includes placing one in your own mancala, but not your opponent’s.

Capture as many of your opponent’s tokens you can (as outlined in the next step).

Now your turn is complete.

If you place the last token of your turn in an empty well on your side of the board, you capture all of the tokens in your opponent’s well directly across from it.

Place all the captured tokens and the capturing token into your own mancala.

If your last stone lands in your own mancala, you may take another turn.

As soon as all wells on one side of the game board are empty, the game is over.

Any remaining tokens on the other side belong to the player who the side belongs to.

The person with the most tokens at the end of the game wins.

Those are the rules of Mancala!  Pretty simple, right?

There’s a reason this game has been around so long.  It doesn’t take much to put a board game together.

People around the world play this game on anything from a carved wooden board to just little holes in the ground.

For our version, we used a few items you’ll EASILY find around your house. 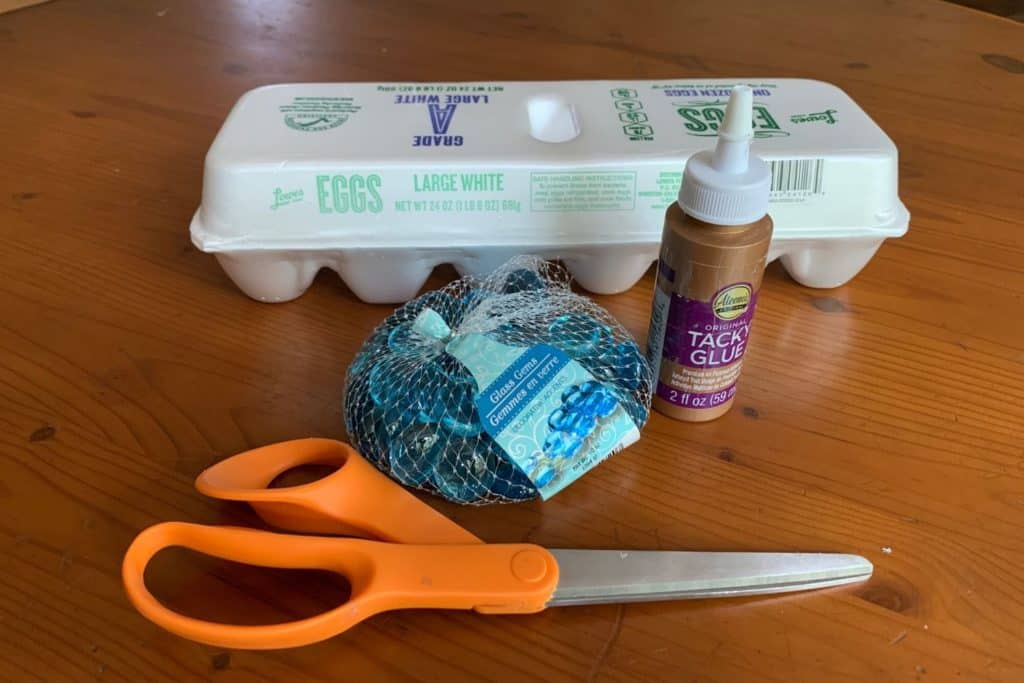 All you need is:

When it comes to tokens, you have a lot of options.  I chose to use some “glass gems” that I found at my local dollar store just because they were pretty and they were the perfect size for this game. 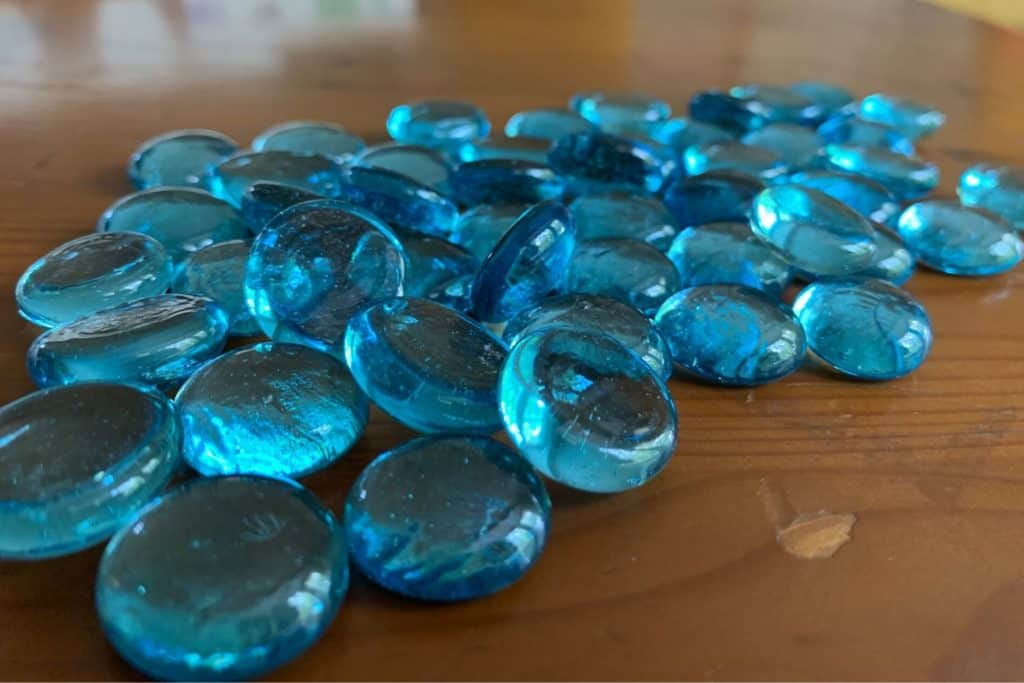 You could use anything really.  I’ve seen small rocks, dried beans, beads, buttons, even pennies.

You could make the game really fun and use jelly beans or candy, and you eat what you win.

Just make sure the items you use will fit appropriately into the wells of the egg carton.

It’s really up to you what you’d like to use for this project.

How To Make Your Game Board

Now to the fun part, making your DIY Mancala game!

You’ll want to start by cutting your egg carton right down the middle.  You’ll want to take care because you’ll need both sides of the carton, 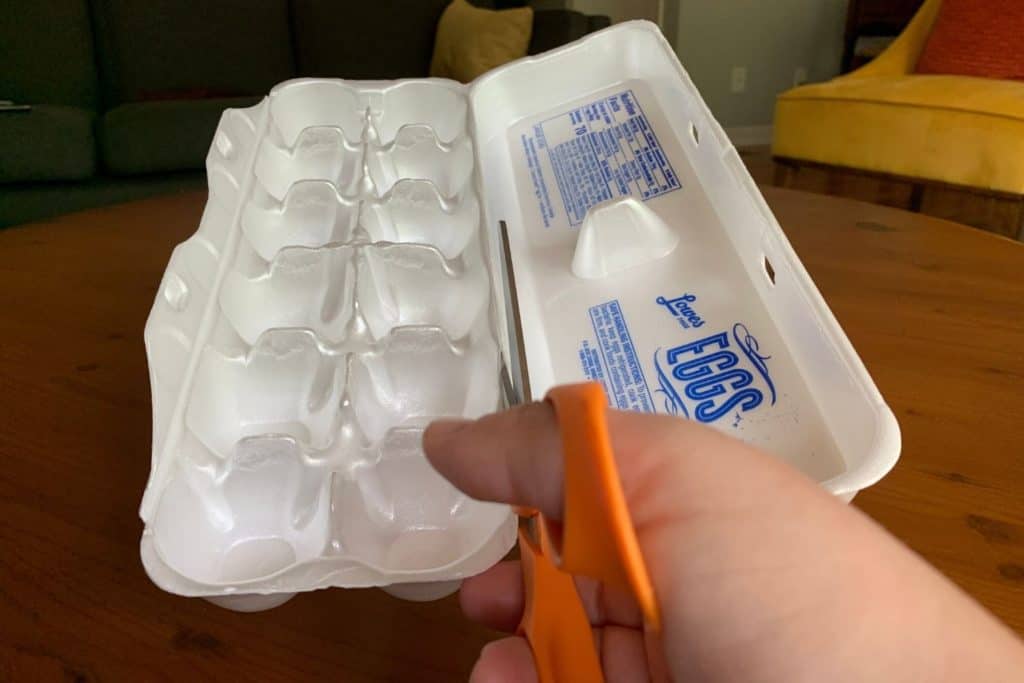 Next you’ll want to trim off the locking tab on the side of the carton.  You can discard it when you’re done cutting it off. 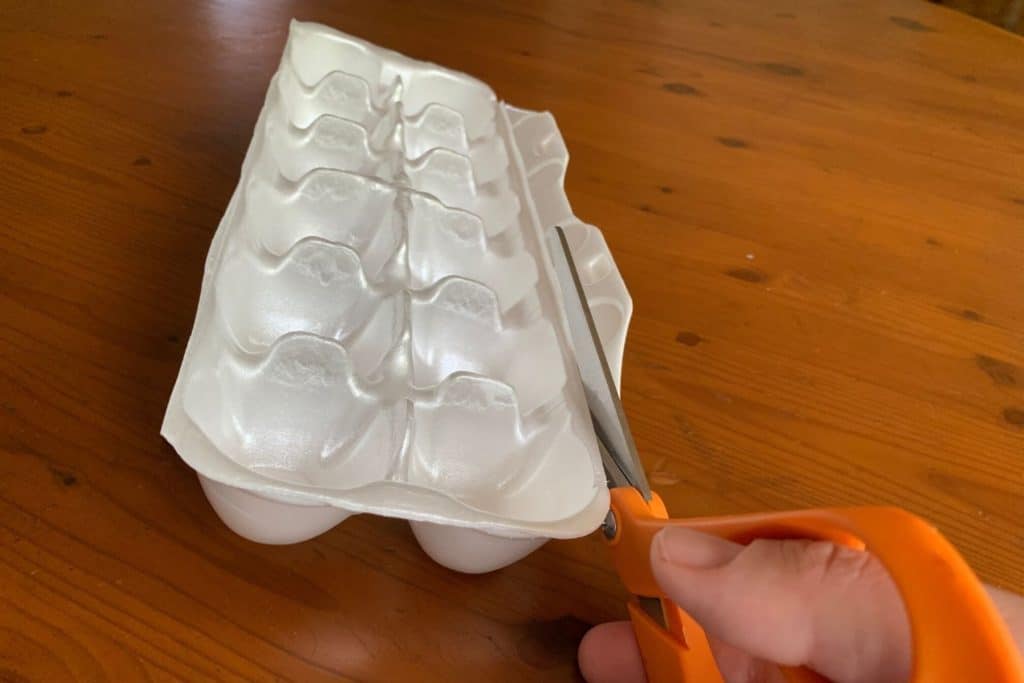 Next, cut the lid portion of the carton in half, trimming off any part that sticks up.  For mine, I cut around the middle portion and discarded it. 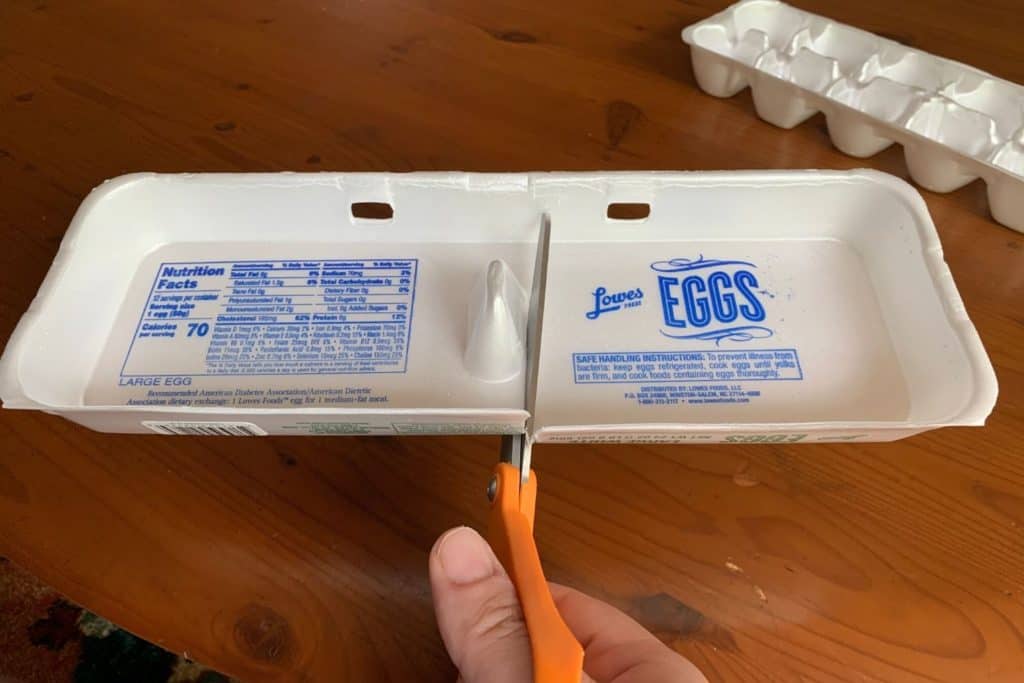 This is what you should be left with now: 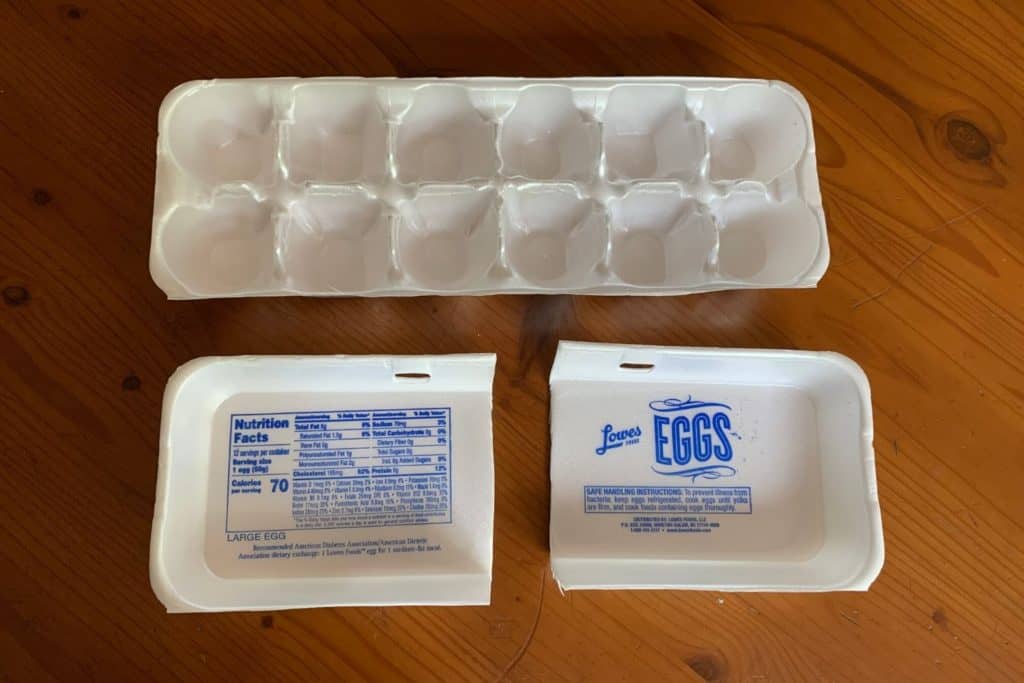 While you could use tape, I recommend using glue for this step.  It makes the game board hold up a longer.

I know some of you may be tempted to use hot glue, but I would STRONGLY advise against that.

If you happen to be using a styrofoam egg carton, like I am in the example, hot glue will melt it straight away.

I recommend a good craft glue like Aleene’s or a regular old Elmer’s School Glue for this step.  Both work great.

You’ll want to place them in such a way that you create two large “wells” at either end of the egg crate.

Instead of guessing where the glue should go and ending up with a big sticky mess, I like to flip the carton over and place the glue on top of the little wells that the eggs go in. 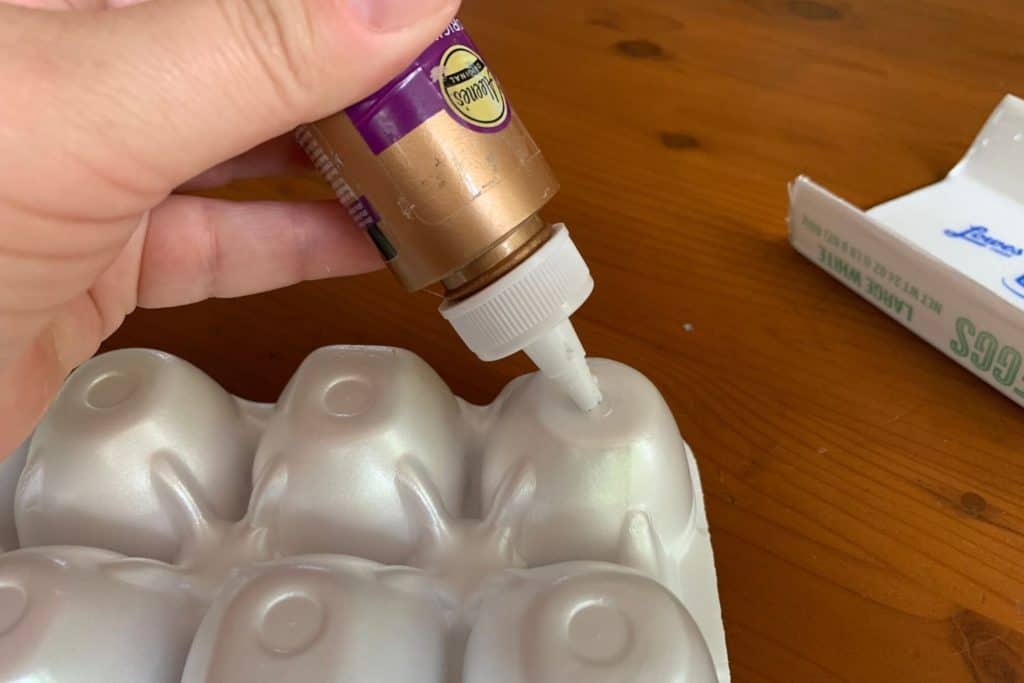 Then I just place the bottom piece over the glue and press firmly. 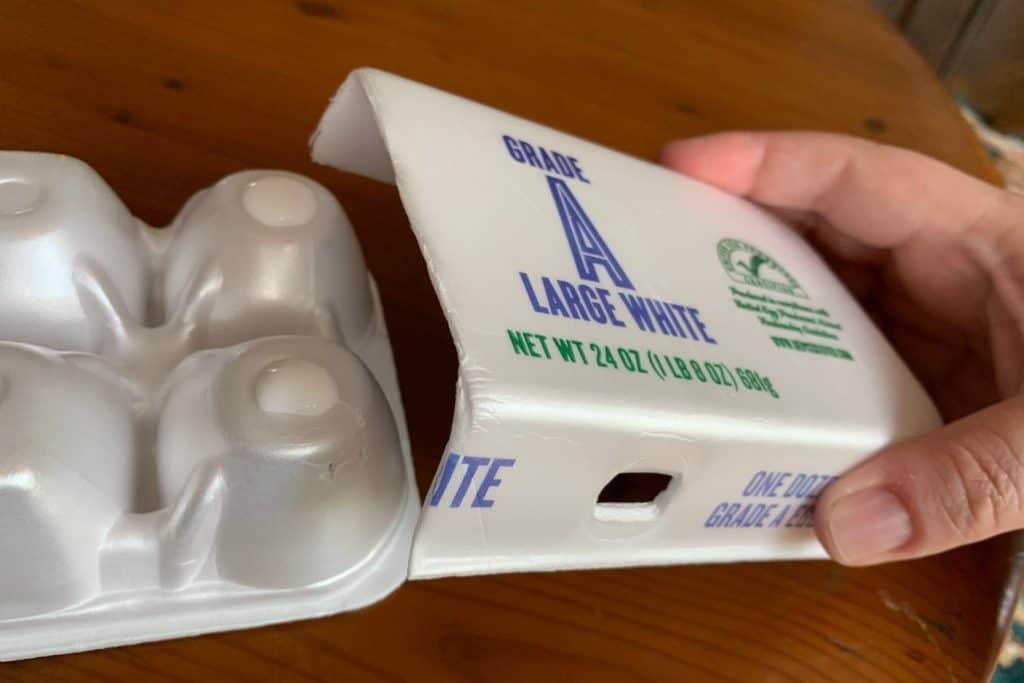 Allow your glue to dry and then your board game is complete!

Now you can set up your board game!  Just follow the simple instructions above, or download and print the instructions by clicking here:  Mancala Rules 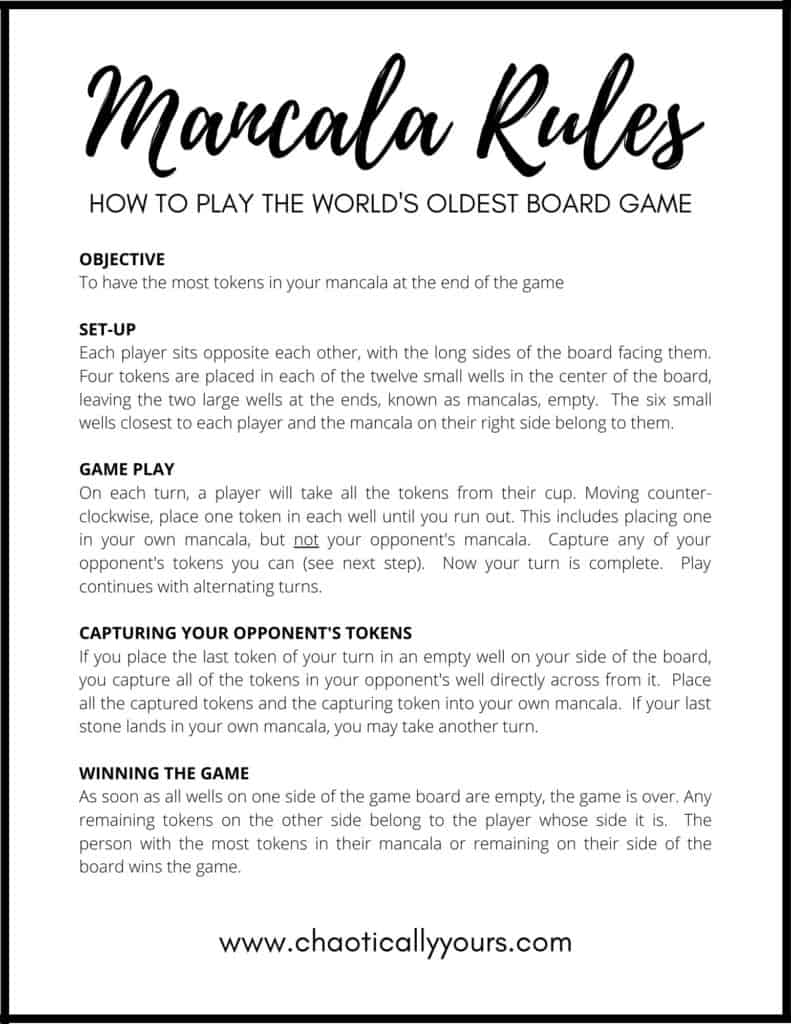 It’s really quite simple, and more fun that you’d think.  There are all sorts of strategies you can use to win the game.

The best strategy we use to win a game of Mancala is to try to think a few moves ahead.  Then you can plan out your attack to get the most tokens.

You can also use this DIY Mancala game to teach counting, logic, math, and other skills.

Now get out there and start playing!!

Looking for another fun project that will keep you entertained for a long time?  Check out How To Make A Hexaflexagon!

Want to make an awesome, personalized t-shirt with just the supplies you have at home?  Check out this Bleach Stencil T-shirt Tutorial!

Mancala Rules: Make Your Own Board Game and Learn To Play!