Disney World is truly the most magical place on earth, but none of that magic would be possible without the amazing Disney Cast Member!

Cast Members (what Disney calls all of its employees) take everyday experiences and make them truly memorable by giving guests exceptional service every single day.

Have you ever had a moment in Disney Parks that was truly unforgettable?  They have happened to me on every single trip I have ever taken to Walt Disney World.  And every single magical experience was made possible by an unbelievable Cast Member.

When I’ve had these experiences, I always want to thank the Disney Cast Member who made it possible.  I’ve discovered three effective ways to not only thank a Disney Cast Member, but to make sure their management knows how great their service was during your trip. 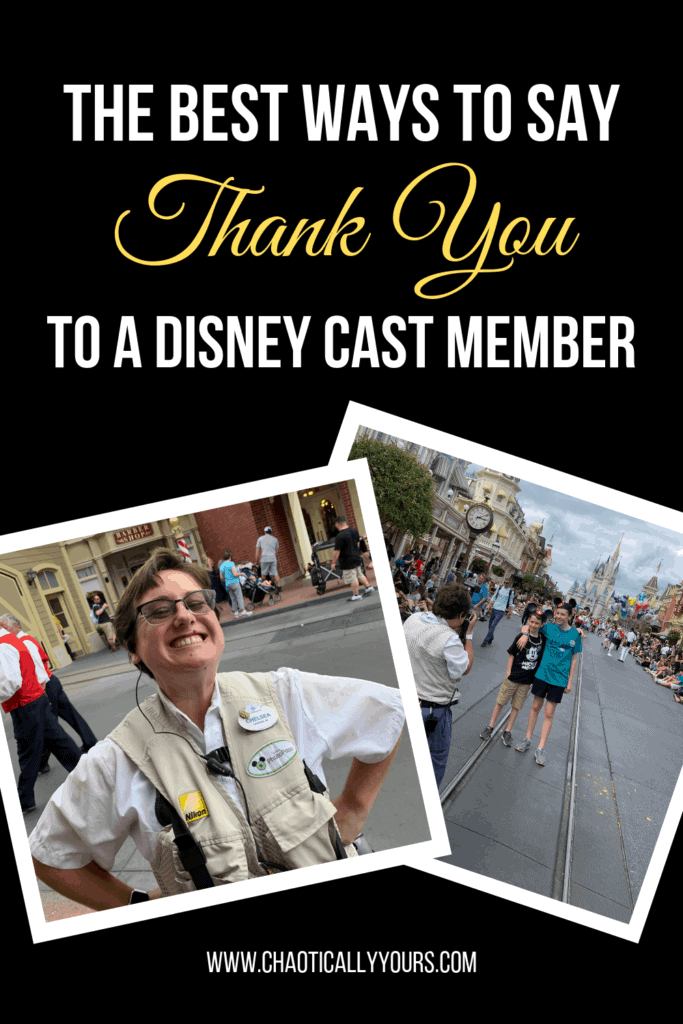 How to Thanks A Disney Cast Member Immediately:

Thankfully, in this day and age, technology makes it possible to communicate our thanks immediately when Disney Cast Member who make our vacations magical.  The best way to do this is to send a Cast Compliment on the My Disney Experience App.

When a Disney Cast Member has made an experience more than magical for me and my family, I ask if I can get their name and hometown for a Cast Compliment.

I have never had a Disney Cast Member ever be anything but thrilled at this request.  They know what it means, and have always been more than happy to give me the necessary information.

I even witnessed a cast member on the tram from the parking lot do a little happy dance after someone asked him if they could take his picture for a Cast Compliment.  These little recognitions really do mean a lot.

How To Send A Cast Compliment

To send a Cast Compliment, simply open your My Disney Experience App, and click on the three lines (aka the hamburger icon) in the bottom right corner of your screen.  This will take you to a menu of options for you to choose from.

Scroll almost all the way down to the bottom of the home screen, below the square icons to where choices look more like a list.

From here, simply tap the “Cast Compliment” area, next to the icon that looks like a tiny nametag.

You’ll then be taken to the Cast Compliment page, where you’ll be asked to select what type of magic you experienced and where it happened.

It’s an optional section, but I highly recommend filling out the cast member’s name, hometown, and the date of the interaction.  This makes sure the person who really went above and beyond for you gets the proper recognition.

Once you’ve selected all these things, simply click “submit” and the cast compliment will be passed along to Disney management.

The process is quite easy and quick to do.   Just check out the video below to see how it goes on the app:

Some people like to do this anonymously, and not even alert the cast member that they’re sending a Cast Compliment.  That’s totally fine, and is a nice way to pass the magic along.

One of the many “secrets” about being a cast member is that if you forget your name badge when you come to work, you’ll be handed the generic “Chris from Orlando” badge to wear during the day.

You wouldn’t want your compliment to get lost in the shuffle, so if you see a Chris from Orlando that you want to compliment make certain that’s their actual name.

How To Thank A Disney Cast Member Sometime Later During Your Vacation:

Want to make sure a specific Disney Cast Member gets recognition for their actions?  Or has been a couple of days since your interaction with a cast member and you still want to give great feedback on what they did for you?

Don’t worry, Disney World has a solution for this also.

Simply go to the Guest Services Area of wherever you happen to be at Walt Disney World.  Explain you’d like to recognize exceptional service by a cast member, and you’ll be given this form: 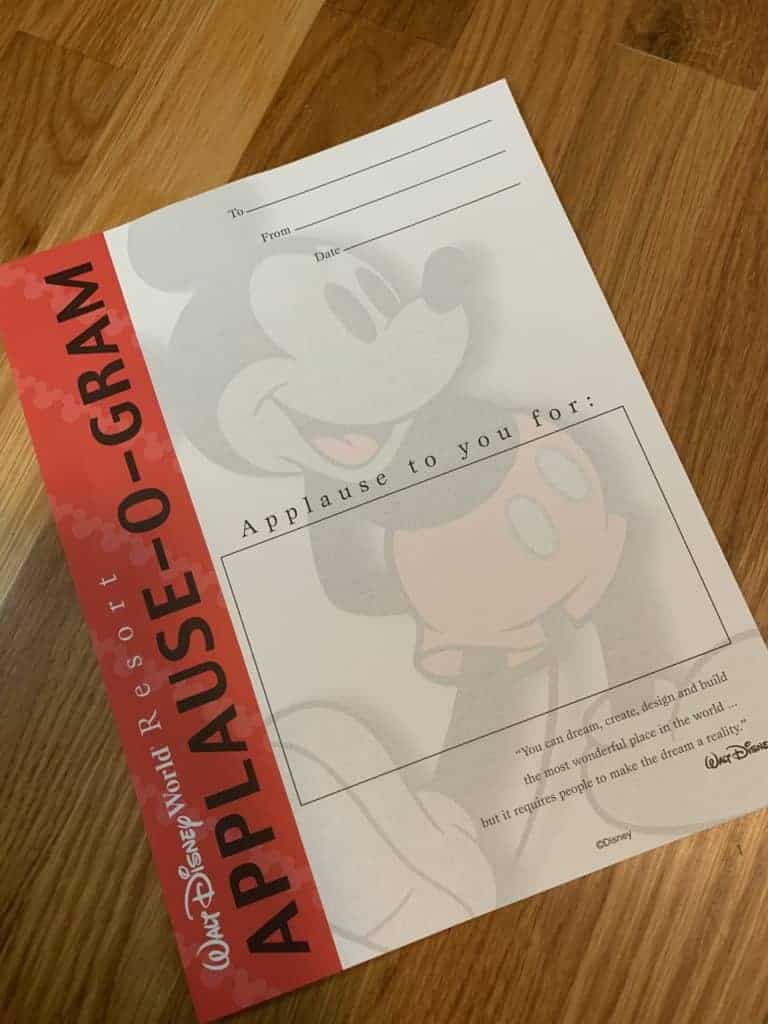 Filling out an Applause-O-Gram is a great way to give feedback about amazing service.

It takes a little more time and effort to complete than using the app, but it’s definitely worth the it.

Since this form of recognition is more specific, they help the career of a cast member at Walt Disney World.

How To Thank A Disney Cast Member After You Get Home:

Did someone really go way above and beyond, and you can’t stop thinking of how grateful you are, even after you get home?  It’s not too late to thank them!

You can always write a letter to the cast member at send it to Guest Experience Services.  The folks at this office will make sure it gets to the person you are trying to thank!

I once had such an amazing experience that I sent a handwritten letter to the cast member, along with a copy of a picture I had taken during the experience.  Sure enough, someone at Disney World wrote me back with a very sweet letter, and let me know that my letter would get to the Disney Cast Member I wanted to thank.

If you’d like to send a thank you to a cast member after you get home, just use the address in the picture below to send your thanks. 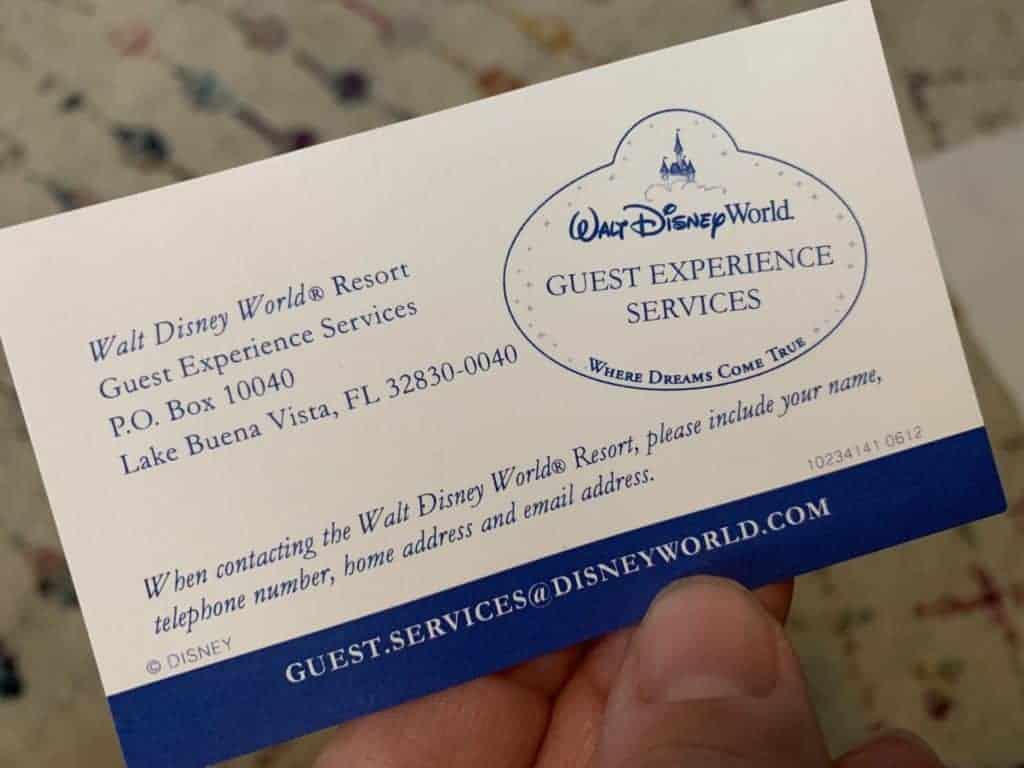 You could also use the email address on the card to send a note about the exceptional service you received.

Every Disney Cast Member truly is the key to the magic at Walt Disney World.  Make sure you take the time to let them know you appreciate what they do!

The Magic Kingdom is my favorite part at Walt Disney World, but it is truly spectacular when the sun goes down.  Check out my post about some awesome things to do at the Magic Kingdom after dark.

Most people miss this incredibly magic moment that happens every day at Walt Disney World!  Read all about it in my post all about the Kiss Goodnight!

Great idea but the twitter account you suggest to send a Cast Complement is no longer active and not used by Disney any longer....

Thanks for the heads up! I'll update the article to reflect this.

Unfortunately, it looks like they are not monitoring that Twitter handle right now. I don't know if that's because of the Covid slowdown, or if they changed it.

I appreciate you letting me know. I'll update the article.

I can attest to the thrill a cast member feels when recognized by a guest. My daughter has worked at the parks a couple of years now. Even if she just gets a small thank you card from a family she saves all of them. It makes her day to be able to make magic moments.