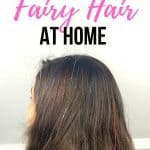 Whether you call it fairy hair or hair tinsel or glitter hair, putting in these sparkly strands is easier than you might think, once you get the hang of it.

The fairy hair trend has been around for a while now.   I’ve seen it in both kids and adults alike, and it’s so much fun, no matter what age you are.

Fairy hair is a really subtle way to add a little bit of fun and sparkle to your hair in a non-permanent way.

We’ve shared fun hair projects before, like our Kool Aid Hair Dye Tutorial, but we really like this one due to the non-permanent, non-damaging nature of hair tinsel. 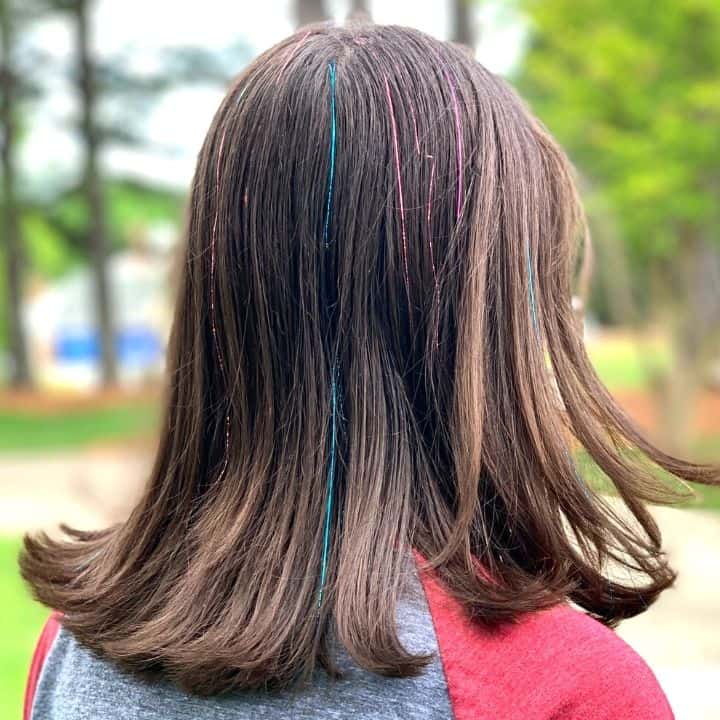 What Is Fairy Hair?

Fairy hair are small, sparkly or iridescent strands of hair tinsel that can be attached strand by strand to your hair at the root.

Fairy hair is great for holidays, parties, and other festivities, but we think it’s super fun for every day too!

Where To Get Fairy Hair

You can get fairy hair put in your hair at lots of salons, but it’s actually super easy to do at home.  It only takes a few minutes to learn how to put it in, and once you’ve mastered it, you can have fun with hair tinsel anytime.

Having fairy hair put in by a professional can get pricey too!  Most salons start at a minimum of $20 for just 5 to 10 strands of fairy hair!   It’s a lot more economical to do it yourself.

While I haven’t seen hair tinsel available in stores, it is readily available on Amazon.

We ordered AMchoice Hair Tinsel.  The kit comes with 2400 strands in 16 colors, so there is NO shortage of fun colors to use.  It also includes a tool to use for installation, but we found it easier to just do it by hand.

Each strand was 48 inches long.  If you have shorter hair, you could cut them in half and have even more of them to use.

You don’t need a ton of supplies to put in fairy hair, just a few basic things you probably already have around your house and the hair tinsel. 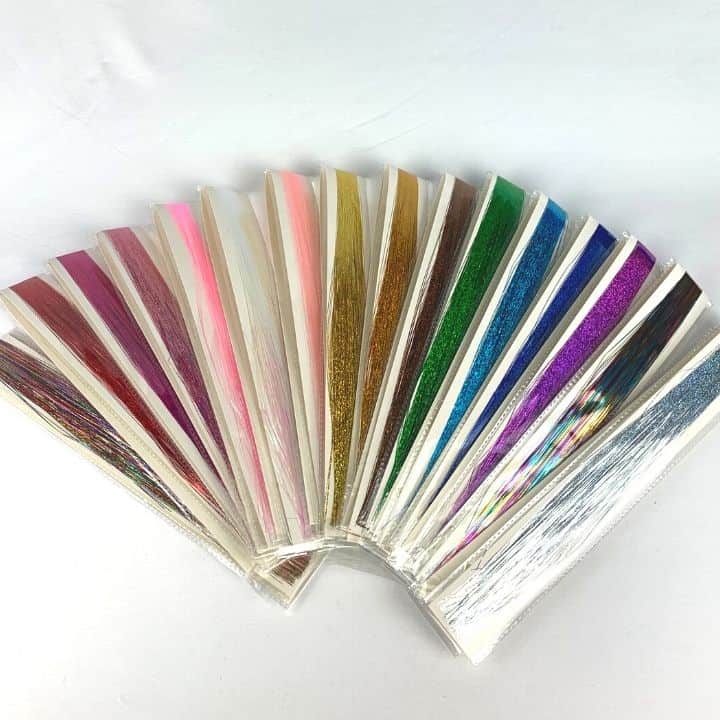 Fairy hair works best on hair that’s at least two inches long, since it can be really difficult to attach to super short hair.

You can put fairy hair on a child of any age.  As long as they can sit still to have it put in, they can get fairy hair.

But be aware that fairy hair may not stay in as long on children, since they tend to shed hair at a higher rate than adults.

How To Put In Hair Tinsel

Applying fairy hair is super easy.  The hair tinsel is simple to work with and only takes a few seconds to get attached once you have mastered the technique.

Fairy hair typically lasts from two to eight weeks, but I’ve heard of some people’s strands lasting as long as two years!!

You’ll want to start with a head of clean, dry, thoroughly brushed hair.   You really want to work out all those tangles BEFORE you apply the hair tinsel.

Start by deciding how much fairy hair you want and where you want it.  Do you want just a few sparkles framing your face or do you want sparkles everywhere?

Once you’ve made your decisions about where and how much hair tinsel to put in, it’s time to start with the actual application.

Isolate the root of the hairs you want to attach the fairy hair to using hair clips to hold back other hair if necessary.

You’re going to create a slip knot on each strand of hair tinsel.

To make a slip knot in your hair tinsel, start by folding the strand in half, finding the middle point.

Criss cross the tails of the strand to form a loop.

Now put your fingers through the loop, and grab the tail of the strand that crossed over the top of the other strand and pull it into your loop, forming another loop.

Complete the knot by pulling up on the loop until it cinches closed.

Studio Knit has a great post with pics and video of how to tie a slip knot that is really helpful for this process. 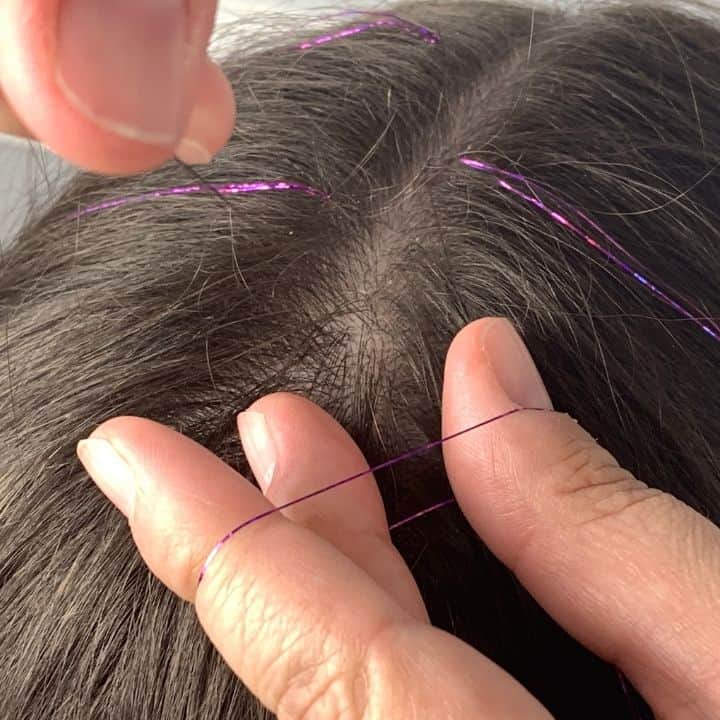 Now thread a few strands of hair  (3 to 5 strands for fine hair or 1 to 2 for thick hair) through the loop of the slipknot.

Pull the slip knot tight and move the loop as close to the root of the hair as you can.

We found it helpful to ask the person who was getting the fairy hair put in to place a finger over spot where the strand was put in place to hold it there while we finished attaching it.

Now take the strand of hair and the hair tinsel and tie the two of them together two or three times.

To finish attaching the hair tinsel, tie the two ends of the fair hair to each other, leaving the hair out of the final knot.

Repeat this process with as many strands as you want, scattering them evenly all over the hair.

To finish it off, trim the hair tinsel to the same length as the hair surrounding it. 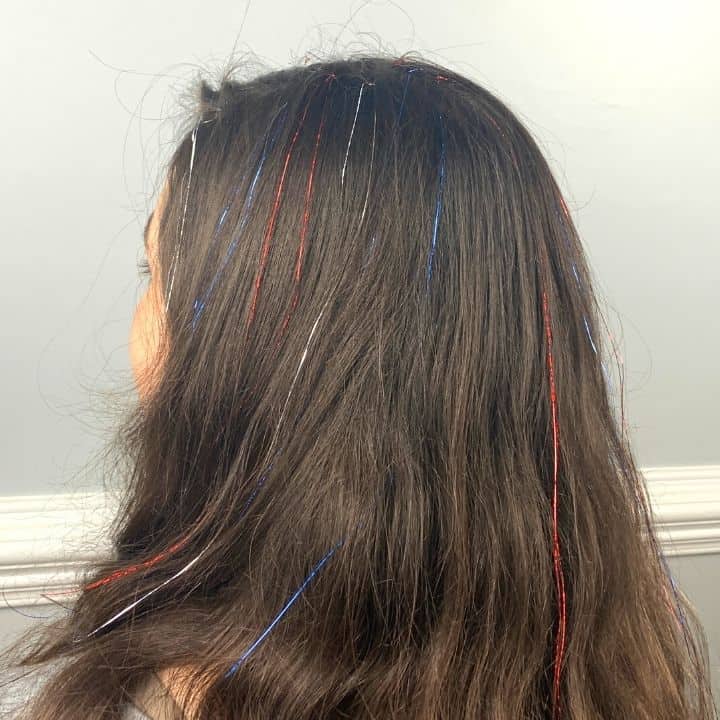 It takes a few tries to really get the hang of it, but by the 5th or 6th strand, you’ll have the process figured out and will be able to put them in quickly.

If the hair tinsel is sliding down the hair and doesn’t seem to want to stay put, add a bit of dry shampoo to the roots to add some texture.  That should help it keep from moving

Want fairy hair to stay in as long as possible?  Add a tiny bit of eyelash glue to the knot to secure it in place.

Be extra gentle when brushing hair to avoid pulling your hair tinsel out and try not to let hair get too tangle to avoid having to tug on the fairy hair to get a tangle out.

Pay attention to the heat restrictions for the brand of hair tinsel you use.  Some brands are rated for higher heats than other brands.  We used lowest setting for applying any type of heat such as flat irons, curling irons, or blow dryers to our fairy hair.

How To Remove Fairy Hair

Fairy hair is super fun, but you may not want to keep it in forever.

If you want to get rid of your fairy hair, you can simply pull it out.  Most times it will pull the hairs it’s attached to out with it, and that can be a tiny bit painful.

You can always remove fairy hair by cutting it out as well. 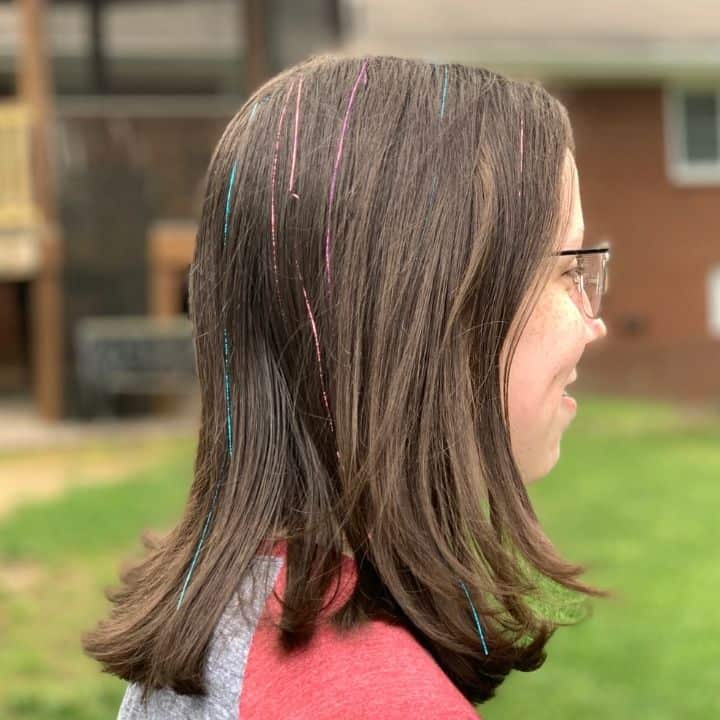 We found that some strands lasted longer than others, and a few fell out the first night they were slept in.  But because we had so many on hand, it was super easy to replace them and keep going.

This was probably due to my inept skills in applying the first few strands.  The ones we put in after I got the hang of it have lasted much longer.

They’ve made it through every day styling and have even made it through a few hair washings!  We’ll update the post when we know the total lifespan of how long they last for us.

Do you love fairy hair as much as we do?  It’s such a fun way to add some sparkle to your look.

Have you tried fairy hair?  Tell us about it in the comments!

Fairy Hair: How To Put Hair Tinsel In At Home

It really depended on the person how long they stayed in. On some people, we've seen them last up to 8 weeks, on others they fell out after about a week. It really seems to depend on the texture of the hair and the styling regimen.

Is it OK to put conditioner on the ends of your hair before placing fairy hair?

I would think it's probably fine.

On average how much did you use total for your hair?

It really depended on what each person wanted. We used about 10 to 15 strands on each girl we styled for the pics for this post. You can use as many or as little as you like!